Formerly known as Vysionics and based in Frimley, Surrey, Jenoptik is a world-leading OEM of cameras for Automatic Number Plate Recognition (ANPR) and its products are renowned for their ability to work in harsh environments and in a variety of lighting conditions. Typically located in hard-to-access places, such as on the tops of poles and on motorway gantries, the units are exposed to all the elements.

Formerly known as Vysionics and based in Frimley, Surrey, Jenoptik is a world-leading OEM of cameras for Automatic Number Plate Recognition (ANPR) and its products are renowned for their ability to work in harsh environments and in a variety of lighting conditions. Typically located in hard-to-access places, such as on the tops of poles and on motorway gantries, the units are exposed to all the elements.

Geoff Collins, Jenoptik’s Sales & Marketing Director, comments: “Product reliability is an absolute must for us, as sending engineers out to replace a camera unit is a very costly exercise. So, for many applications, the customer wants to be able to install the camera unit and not remove it from site for 10 years.”

Collins goes on to say that product reliability is achieved through a combination of good design, well controlled assembly and rigorous testing. Of these three elements, assembly and test are the responsibility of NOTE Windsor.

The relationship between the two companies dates back to 2011, when Jenoptik’s products were fixed focal length camera units, used solely for average speed monitoring on the UK’s roads. Each unit contained two cameras, one with a narrow field of view and grey-scale imaging for reading number plates and one with a wider field of view and colour imaging for capturing the fuller scene. “Back then the camera units were essentially analogue devices, in that the data processing was all done in roadside cabinets,” recalls Collins. “It was a fairly distributed system that had to be tailored to a precise application.”

For those early camera units, NOTE Windsor assembled, tested and supplied Printed Circuit Board Assemblies (PCBAs) in sets to Jenoptik, which performed the final assembly and unit test in Frimley. The boards were assembled on a build-to-order basis and product shipment rates were averaging about 10 per month, but with significant peaks and troughs month-on-month.

In 2013, a new product, called VECTOR, was launched. It is a highly integrated digital unit (again containing a grey-scale ANPR camera and a wide angle colour camera) and is available with a range of lens options. VECTOR’s electronics includes flash memory for embedded firmware and software updates. The unit also supports a variety of communications protocols thus enabling not only application-specific configuration, as the final build step, but also in-field upgrades. 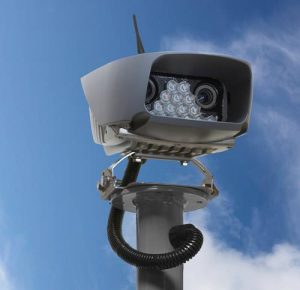 “VECTOR was a real game-changer for us,” says Collins. “We designed the unit’s hardware for average speed enforcement because it’s a very challenging application. The cameras need to be able to work in the dark and capture images of number plates of vehicles travelling at high speed. Once we had the hardware platform, we were able to make modifications to the software and firmware in order for the camera units to be suitable for a variety of other applications. Also, compared to its predecessor, VECTOR is more like a networkable piece of plug-and-play IT equipment, which makes for a far better out-of-the-box experience for our customers.”

The strategy was a good one, and VECTOR can be configured for journey time systems, bus lane enforcement, congestion charging, car park management and many other Intelligent Transportation System (ITS) applications. Collins: “The UK is extremely good at ITS, and ANPR is essentially a form of automatic data input and image capture, as required by virtually all ITS applications the world over.”

During the development of VECTOR, NOTE Windsor assisted with the design-for-test and design-for-manufacture aspects of the PCBAs. Also, because the VECTOR camera unit is far more complex than its predecessor, Jenoptik had to choose between either gearing up for more complex final assembly work in-house or outsourcing the box build. 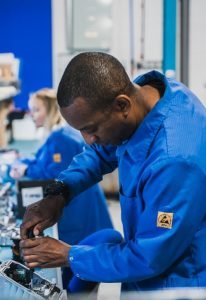 It chose the latter, selecting NOTE Windsor because of the CEM’s quality PCBA work, the final assembly work it does for other customers and, of great
importance, its willingness to be flexible in light of potentially even greater peaks and troughs in the monthly orders. Jenoptik also required, and continues to need, very short-lead times (1 to 2 weeks) as the product variants ordered by its customers tend not to be known until the last minute; noting here that a traditional build-to-order scenario would normally require between 16 and 20 weeks for component sourcing, build and test.

“Also of great appeal to us is NOTE Windsor’s approach to business,” adds Collins. “There’s little if any of the red tape that so often prevents a traditional customer-CEM relationship from becoming as efficient and mutually beneficial as possible. For VECTOR final assembly work, NOTE willingly allocated people and reserved a significant part of their shop floor just for us, which we’ve come to regard almost as an extension of our engineering department.”

NOTE Windsor built a number of prototype PCBAs for VECTOR which Jenoptik used for final assembly trials and to document the processes. NOTE then performed a number of final assembly pilot builds, during which much was learned and processes were honed. For instance, although final assembly could be performed by just one person, the complexity of the product and the levels of test and quality assurance required made it practical to employ a formal flow-line, a practice normally associated with higher volume production.

It was initially projected that the average monthly build would be around 50 units per month, but that the month-on-month volume might vary up or down considerably. However, the flow-line NOTE put in place can comfortably accommodate up to 300 VECTOR builds per month.

Inside the fixed focal length VECTOR cameras there are five PCBAs, four of which NOTE Windsor assembles and the fifth is bought in. To meet Jenoptik’s extremely short lead-time build-to-order requirements, NOTE assembles VECTOR’s PCBAs, holds them in a Kanban system and then treats them as stock items. Assembled PCBA stock dipping below certain levels triggers the ordering of components and automatically schedules the manufacture of more boards. The entire process runs in the background to support the final assembly work.

As for the top-level components, such as lenses, these are managed on a min-max basis, and Jenoptik underwrites an agreed maximum based on individual component lead-times and the agreed run rate. “We recognise that this is a considerable investment for NOTE Windsor to make and that the stock takes up a lot of space,” comments Collins, “but thanks to their support we’re able, in turn, to support our customers with competitively-priced, short-lead-time products, which is key in the competitive market place in which we operate.” 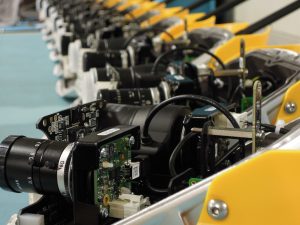 Over 100 different components (of which the PCBAs can be considered as five) are required for the final assembly and, as mentioned, there are detailed and frequent inspection points to ensure product conformance. There is also a comprehensive test strategy, implemented in five stages:

Keeping Up With Erratic Demand

As predicted, the orders for VECTOR were initially erratic following its launch and in light of a general upward trend, the average monthly build increased towards the end of 2014, round about the time Jenoptik acquired Vysionics.

In early 2015, a motorised zoom camera joined the VECTOR family. Again, NOTE Windsor supported the new product introduction with design-for-test and design-for-manufacture guidance. Accommodating the new cameras into the workflow presented no major problems, as sufficient pre-assembled PCBAs and components were always in stock.

Most recently the average monthly build has been increased to more than 100 units, a figure well within the capability of the current flow-line, meaning peaks and troughs can still be accommodated. Collins comments: “The increase is partly as a result of the acquisition. Up until that point 98% of our sales were in the UK, but now we’re part of the Jenoptik family we have access to the international ITS market place.”

The relationship between JENOPTIK Traffic Solutions UK and NOTE Windsor has gone from strength-to-strength. It is one of close collaboration, trust and flexibility. Collins concludes: “In the sectors in which we work, successful market penetration depends on the speed at which we can provide customers with dependable and well-made products. NOTE Windsor helps us do that through their implementation of volume production processes, innovative Kanban and line-side stock systems and first-rate supply chain management. They’re the perfect out-sourced assembly partner.”

See why NOTE is right for you.

We Know How to Do It Right

We add value to every link in the chain.

Can your board designs save money?

As part of our ongoing improvement ethos, we look at how to save you cost by implementing good… 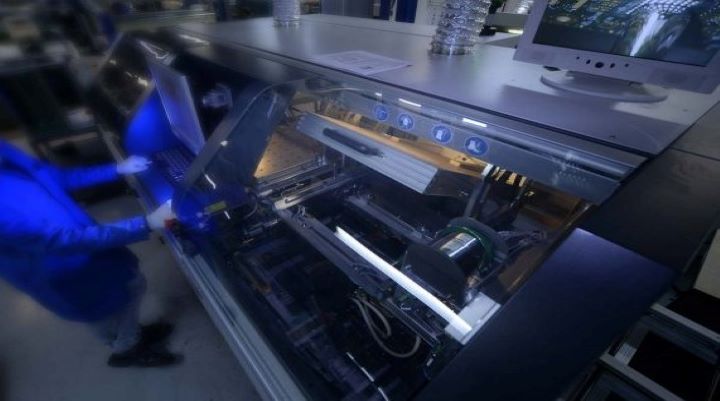 Selective Soldering – is it for you?

The Basics Remain Much The Same Despite the myriads of component types, diverse and complex nature of technology…

Benefits of a Kanban System

Introducing a Kanban system in electronics manufacturing can bring a variety of benefits for any OEM with unpredictable customer demand and lengthy supply lead times.