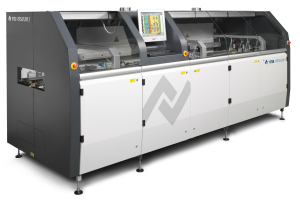 NOTE’s facility in Windsor has invested in an ERSA Versaflow 345 in-line selective soldering system, enabling the Contract Electronics Manufacturer (CEM) to tackle increasingly complex double-sided, mixed-technology PCB assembly projects; and in particular boards which must be manufactured to the IPC-A-610 Class 3 standard.

Whilst some double-sided, mixed-technology PCBs can be manufacturing using wave soldering (using either a glue and wave process or pallets to mask underside SMDs) this is becoming increasingly impractical for densely populated boards.

Neil Owen, NOTE Windsor’s Managing Director, comments: “An alternative is to hand-solder the plated through-hole components, but even the most-skilled operators cannot produce the same level of consistency as an automated process – especially for IPC-A-610 Class 3 which requires barrel fill to be at least 75% for every hole.” 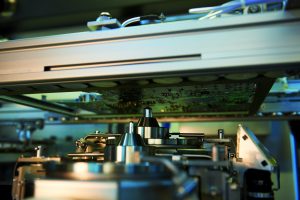 Selective soldering has much in common with wave soldering – in terms of fluxing, pre-heating and soldering stages – but components are soldered on a pin-by-pin basis and without disturbing pre-placed neighbouring components.

Owen adds: “Complex circuit boards tend to be high value, so their manufacture demands the use of the most appropriate equipment and techniques in order to deliver consistently high quality and to ensure the customer receives a cost-competitive and efficient service.”

The ERSA Versaflow 345 is a modular system, and NOTE Windsor’s machine is being configured as a single track system with fluxer, pre-heat zone and two solder pots (to support the use of two different nozzle sizes). Boards will be loaded and unloaded automatically and the system will have a high-resolution camera for viewing the soldering process. In addition, NOTE has also purchased a Nitrogen generator to feed the solder pots – enabling the soldering to be performed in an inert atmosphere and thus produce better quality joints, as well as improved aesthetics.

Owen concludes: “We spent about six months researching selective soldering and considering the benefits of the different systems available on the market. We have opted for a highly spec’d system as it meets our current and future requirements.”