In today’s world, printed circuit boards (PCBs) are everywhere.  You can find them in smartphones, tablets, computers, radios, medical devices, smoke detectors, security cameras, LEDs, automotive & aerospace components, and all sorts of other electronics.  Even though we use electronic devices daily, we often don’t realise how important these boards can be in modern technology.

Although the development of the PCB can be traced back to the 1890s, the invention is generally accredited to Paul Eisler, an Austrian inventor, who developed the printed circuit board in 1936 when he was working on a radio set.  PCBs didn’t see mass usage until after the 1950s, and their popularity grew rapidly from there.

Green is the colour of the solder mask, which protects the copper circuits printed on the fibre glass core to prevent short circuits and soldering errors.  There are a few theories as to why PCBs are green, the most common are: 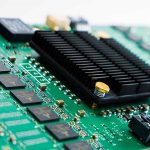 PCBs were an integral part of NASA’s space programme.  They helped send the Apollo 11 astronauts to the moon – and back home again safely.  PCBs light weight and small electricity requirements permit more complicated electronics in the confined area of a spacecraft.

Over time developers are making PCBs increasingly smaller, as the manufacturing is becoming more accurate and being smaller means that they save space.  This is also because the electronics we use today are smaller too.

Circuit boards are complex electronics with lots of components and they all have their own individual properties and serve different purposes on the board.  The list of components you can expect to find on a PCB includes (but not limited to): capacitors, resistors, inductors, diodes, batteries, fuses and transistors.

PCBs are completely wire-free – circuit boards utilise copper traces to transport electrons.  These traces are a lot smaller than your traditional wires and they are also flat which means they take up less space.  Using copper traces proves to be more efficient than using wires when connecting small components on a circuit board.

The rules of physics strictly govern over printed circuit boards.  The most famous of these amongst electrical engineers is Ohm’s Law.  Ohm’s Law dictates the relationship between current, resistance and voltage – the principle that electrical current is proportional to voltage, and inversely proportional to resistance.

There are two main methods of mounting components onto a circuit board; through hole technology and surface mount technology.

Through hole was developed in the 1940s and it had become a very popular method of mounting components.  Essentially through hole utilises holes that are drilled into the PCB 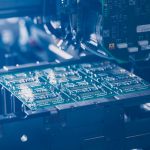 and then leads of components are fed through and soldered onto the pads on the opposite side.

Surface mount technology was then developed in the 1960s which is a technique that allows components to be placed directly onto the surface of the board.  This eliminated the need  to drill holes through the PCB which meant that the mounting and soldering of the components can be automated which saves time which then saves money.

Not all PCBs are the same.  There are several types of circuit boards available, and each has their own properties that are suitable for certain tasks.  Some may be more suited to low performance devices so the PCB would be cheaper and easier to manufacture.  Other types of boards may be more suited to high power device, but these will be more expensive to manufacture.  For example, single sided, double sided, multi-layered PCB, flexible, rigid and flex rigid.